The Time Jon Saved Me From The Bully 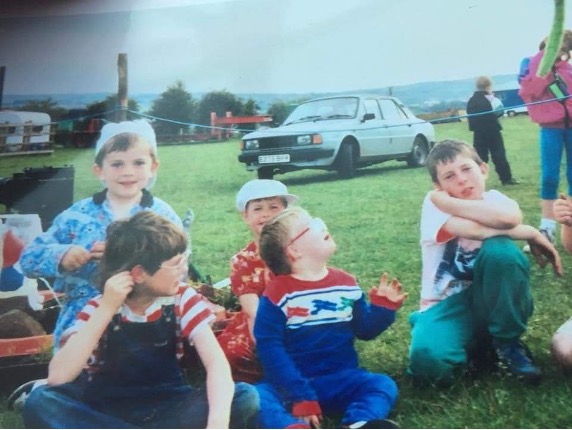 It was a mild spring day and I was attending an afternoon playschool.  I was 3 years old and, although big for my age, to be honest I was a bit of a wimp.  Jon would’ve been 4 by then and just getting ready to start school.

It was in a church hall in Beighton, the village in the South East of Sheffield, UK.  I have fond memories of carpet time with postman pat, stories and games.  However we all knew that the toy cupboard was the jewel in the crown with sit on cars, mini castle and wendy houses galore; it was a child’s dream.

Jon and I had been regular attenders to the sessions and this particular day at the start of playtime I had scored big, a ride-on police car!  After about 30 secs of buzzing around screaming “NEE NAA” at the top of my voice and arresting all the baddies I went to see where my brother was.  He was in the Wendy house.  Jon loved playing homes, whether it was cooking, cleaning, caring for the other toys Jon was there.  Jon was in the “garden” of the house with a baby in a trolly, as though he’d just purchased it from the supermarket.

I made an attempt to get in the door but to my surprise the door was barred.  Some kid was inside and didn’t want company.  The kid then opened the door and aimed a kick at me, slammed the door shut and explained that in no uncertain terms that this was his house.  Being the big softy I am, I started crying, at which point, unbeknownst to me, Jon had heard the commotion, climbed through the window and evicted the child (who was now crying) from the house.

Jon and I then had a wonderful time playing houses together for the rest of the afternoon.

So whilst many people worry about the impact on the sibling of having a disabled brother or sister, it’s important to know that for us, it just is. People with Learning Disabilities just are to me; no more special than you or I. They are ordinary human beings with their own personalities, quirks, likes, dislike.  Jon was my brother and that was that, we played, fought, loved and grew up together.

I was there for Jon yes but Jon was also there for me.  (I never had any trouble with that kid again at playschool and I think Jon was the reason for this).